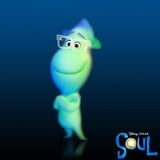 Get the Full StoryIt's been more than five years since director Pete Docter teamed up with Pixar to release Inside Out, a movie that explored the depths of human emotion in a family friendly way. Years later, Docter who serves as Pixar's Chief Creator Officer is back with yet another insightful and introspective idea: Soul. He revealed more details about the upcoming film at the D23 Expo in Anaheim on Aug. 24, including a rundown of the movie's cast and soundtrack.

Soul focuses on Joe, a middle school music teacher with aspirations to at The Blue Note, a famous jazz club in New York. His plans are derailed when he slips into an open manhole and takes a glowing green form, representing his own soul. Joe then embarks on an existential journey and lands at the "You Seminar" - where souls are developed.

The 37 Disney Movies You Can Stream on Netflix With Your Kids in 2019 - Before They're All Gone!

In addition to an already exciting story line, Soul promises an original soundtrack with new music from Jon Batiste and a score written by Trent Reznor and Atticus Ross from Nine Inch Nails.

The Street Style at Paris Fashion Week Is Surprisingly Chill
If You're Planning to Splurge This Spring, These Are 12 Designer Bags We're Majorly Here For
4 Ways to Start Being a More Thoughtful - and Sustainable - Consumer
"Bouquet Dressing" Is the Spring 2020 Trend of Mixing Florals, and You'll See It Everywhere
Mariah Carey's Daughter Asked Her to Do the High Note Challenge, and This Mama Delivered