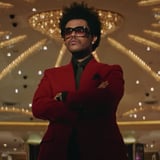 Get the Full StoryThe Weeknd is on a roll! After dropping two new singles, "Heartless" and "Blinding Lights," last week, the 29-year-old singer released the accompanying music video for "Heartless" on Tuesday. In the video, The Weeknd sports a red suit during a trippy night in Las Vegas that involves lots of gambling, drinking, and licking a toad. The Weeknd previously gave fans a sneak peek at the music video by sharing plenty of stills on Instagram.

The tracks are both part of The Weeknd's upcoming fourth album, Chapter IV, which will join his three other albums, Kiss Land, Beauty Behind the Madness, and Starboy, as well as his 2018 EP My Dear Melancholy. A release date for the album still hasn't been announced yet, but at this rate, The Weeknd will probably let us know very soon.

Which "H2O: Just Add Water" Mermaid Are You?
Storm Reid Treated Herself to an Inspiring Tattoo For Her 17th Birthday: "I m So Appreciative"
Hey "Dance Academy" Fans, What's Your Favourite Moment From The Series?
19 Pictures That Will Make You Say "You CANNOT Be Serious Right Now"
I Watched The "Dance Academy" Movie For The First Time And It Was Way More Emotional Than I Expected