What to Know Before You Watch Netflix's The Princess Switch: Switched Again With Your Kids 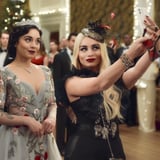 Get the Full StoryPrincesses, romance, beautiful cakes, and heartwarming female friendships - all wrapped in a pretty Christmas bow - make the new Netfilx original movie Princess Switch 2: Switched Again just as charming as the first iteration, The Princess Switch. The sequel picks up one year after Stacy and Prince Edward got married, as Margaret's Christmas Day coronation is approaching and her relationship with Kevin is on the rocks. But this movie brings a third lookalike, even more drama, and slightly more adult humor that some parents may want to be aware of before watching with their kids, even with the G rating. Keep reading for a few moments to look out for before pressing play on this heartwarming holiday movie.

There are a few mild sexual innuendos.

Throughout the movie there is some mild sexual innuendo - Stacy and Prince Edward are married, after all - but it isn't anything vulgar. In one scene, they are wearing modest pajamas although Edward's naked torso can be seen in one moment as he pulls a shirt on , and the Prince mentions to his wife that "there are other things we can do to relieve your anxiety" when she says she can't sleep because she's worried about Margaret. There are also several romantic kissing scenes in the movie.

The characters enjoy a few adult beverages at parties.

There's some light champagne drinking at the royal parties, although nobody is ever seen drinking to excess. In one scene, Fiona's staff are at a bar with colorful cocktails nearby, but they aren't drinking.

Fiona - Vanessa Hudgens' third character in this movie! - is wild, evil, and is behind many of the film's uncomfortable flirting. She makes growling noises at Kevin, she calls Edward "Royal Six Pack" while touching his stomach, and she whispers in Frank's ear to ask if he's been naughty or nice in a seductive way, for example. It's nothing that crosses the line, but it is a bit awkward and unreciprocated .

And there are a few violent scenes.

When Stacy-dressed-as-Margaret enters the bathroom to clean up a stain on her dress, Fiona puts a cloth over her face to make her pass out, which viewers assume is dipped in chloroform. Then, Fiona and her staff carry Stacy out to kidnap her. During Stacy's escape scene, there is some humorous violent moments as she escapes, including a barrel rolling Reggie into a bookshelf, Mindy being locked in a cage, and Prince Edward punching Reggie in the face. There is nothing bloody or over-the-top, though.

Overall, this film was amazing, and my family loved it! My kids 3 and 1 weren't interested the entire time, and I can see how all the switching roles and complicated love interests would be very confusing for little kids to follow. If they can't sit still for it, then just try again next year. But, if they love romantic holiday movies, filled with charming royals, then they will absolutely adore this movie.