Kelly Clarkson Discusses How Divorce Impacts Family: "It's Your Babies You Worry About" 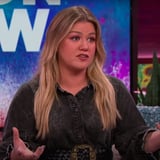 Get the Full StoryAs Kelly Clarkson navigates her divorce from Brandon Blackstock, their kids - River Rose, 6, and Remington Alexander, 4 - are her first concern. On Tuesday, the singer opened up about dealing with a public split while also being a mother on The Kelly Clarkson Show. "It's horrible," she admitted. "There are so many hard parts. The hardest for me is the kids. That's the hardest for me."

Glennon's comments struck Kelly and guest Alicia Keys, who was visibly impacted by her words. "We've all been trained to believe a good mother is a liar," Glennon continued. "I didn't leave a marriage in spite of being a good mother. I left because I am a good mother."

Kelly told Glennon she resonated with this feeling while reading her book Untamed, and it emboldened her to "make a step" in her own relationship. "Not just for me, but also for my current husband. This isn't happiness for both of us. Both of us deserve better. Neither one of us would want this for our children." Catch Kelly and Glennon's conversation about divorce starting at the 2:05 mark above.

This Little Girl's Iconic Girl Scout Cookie Sales Pitch Shows the Art of Making a Deal
35 Pictures That Will Make You Reevaluate Your Entire Insignificant Existence
Stars Remember Kobe Bryant: "We Will Forever Speak Your Name"
From Skins to It's a Sin, Here's Everything You Need to Know About Olly Alexander
I Know What It's Like to Walk on a Cloud, Thanks to These Banana Republic Slippers