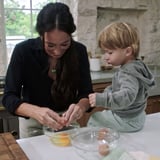 Get the Full StoryApparently, 2-year-old Crew Gaines is quite the escape artist! In a heartwarming video that was shared on Magnolia TV's YouTube channel, we see Joanna and Chip's youngest son sneak away from Chip and stop by the kitchen to help his mom cook.

Although it's clear that Joanna has no idea how Crew managed to find her - he was supposed to be with Chip, after all! - she helps him crack an egg and takes him out to the garden to pick a flower and some herbs. And by the way, watching Crew smell various plants is the cutest thing we've ever seen.

A Boy Woke Up at 3:23 a.m. to Help His Baby Brother, and Wow, That Sweet Camera Footage!

Chip eventually comes outside to snag the adorable toddler. "Crew, listen, you cannot run off and cook with Mama," he told the 2-year-old, to which Joanna responds, "Yes, he can , he was doing so good, Chip!" The father of five then proceeded to stir up trouble by asking his youngest son who his favorite parent is, and it seems like Crew simply can't make up his mind. How sweet!

Don't Get Other Vaccines Around the Same Time You Get the COVID-19 Vaccine, Experts Say
Shopbop Dropped 16 New Pieces That'll Have You Dreaming of a February Shopping Spree
For Black Women, Rest Is an Act of Resistance and Radical Self-Love
This 1-Dish, Sugar-Free Baked Oatmeal Fills Me Up For Hours and Takes 30 Minutes to Bake
Abigail Cowen's Been Blond Before, but Do You Know Her Natural Hair Color?