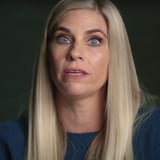 Get the Full StoryWe can't stop watching the new HBO documentary Tiger, which outlines Tiger Woods's rise to fame and the ups and downs of his success - from reaching near perfection in the game to battling his demons outside of the course. Interviews with Woods's high school sweetheart Dina Gravell-Parr play an integral part in the documentary's analysis, bringing in firsthand information about who Woods was as a teenager and how that might have led to who he is today. It's no secret that Woods has a fraught relationship with his father, Earl, who propelled him to success while also inhibiting him from having a "normal" life, but Dina's comments further cement the kind of pressure Woods has felt throughout his entire life.

HBO's doc includes interviews from various people once close to the golfing giant - his former mistress Rachel Uchitel, his longtime caddy and best man Steve Williams, and even his kindergarten teacher, Maureen Decker. Each of those interviews are illuminating in different ways, further painting a picture of Woods as a man dealing with insurmountable anxiety toward fame and notoriety and his own impossible ambition, but high school girlfriend Gravell-Parr's interview is especially engrossing. In the documentary, Gravell-Parr describes getting dumped unceremoniously by the soon-to-be golfing great, which left her devastated.

According to Woods's first girlfriend, he ended their three-year relationship with an impersonal letter, which seemed to be a product of the golfer's family. Woods simply wrote: "Dina, the reason for writing this letter is to inform you that my parents and myself never want to talk or hear from you again. Reflecting back over this relationship, I feel used and manipulated by you and your family. I hope the rest of your life runs well for you. I know this is sudden and a surprise but it is, in my opinion, warranted. Sincerely, Tiger." About the letter, Gravell-Parr says "I play it over and over in my mind. It was like a death, and I had to treat it like a death," blaming Woods's parents, who she still believes forced their son to break up with her.

The documentary describes how Woods came home from Stanford a day early to stay with Gravell-Parr, lying to his parents about it. Earl and Kultida soon found out and pushed their son to break up with his longtime love or find another place to live - the stakes were just too high. Former family friend and golf coach Joe Grohman supports this story, citing how Tiger called him for help, and Gravell-Parr talks about how she still regrets not driving to Woods's house and confronting him. She also speaks about the pressure Woods faced and his problematic home life, describing how much he enjoyed dancing around her family's house, even dressing up like Santa Claus on Christmas. His family was not a fan of Gravell-Parr's and feared their relationship would end up in an unwanted pregnancy, thwarting all that they had worked for. Gravell-Parr continues, "The person that I fell in love with, the Tiger that I had known, had died. That part of him, the part of his soul that I knew would never treat me that way, his sweetness was stolen from him . . . a new Tiger was here. And he was all about golf."

This idea of not being able to relax, and always having to stick to the master plan, connects to the rest of the documentary's touchstones, ranging from his infidelities to his issues with addiction. Both Gravell-Parr and former mistress Uchitel describe his almost childlike need for emotional support from them, and Gravell-Parr specifically remembers being "the bridge" to give him a normal life without pressure or expectations. She continues, "I felt like his parents plans were creating this robot" and that "his sweetness was stolen from him."

Kristen Stewart as Princess Diana Made Me Do a Complete Double Take
The Crown Cast Dancing to Lizzo's "Good as Hell" Is the Highlight of Our Week
Kraft's New Candy Mac and Cheese Is . . . Not Exactly What I Had in Mind For Valentine's Day
The Hustle That Made Sheika Daley: From Strip Club Makeup to Red Carpets Everywhere
Love All Things Peter Pan? These Tattoos Might Convince You That Growing Up Isn't So Bad