Pros and Cons from UFC 270: Ngannou vs Gane 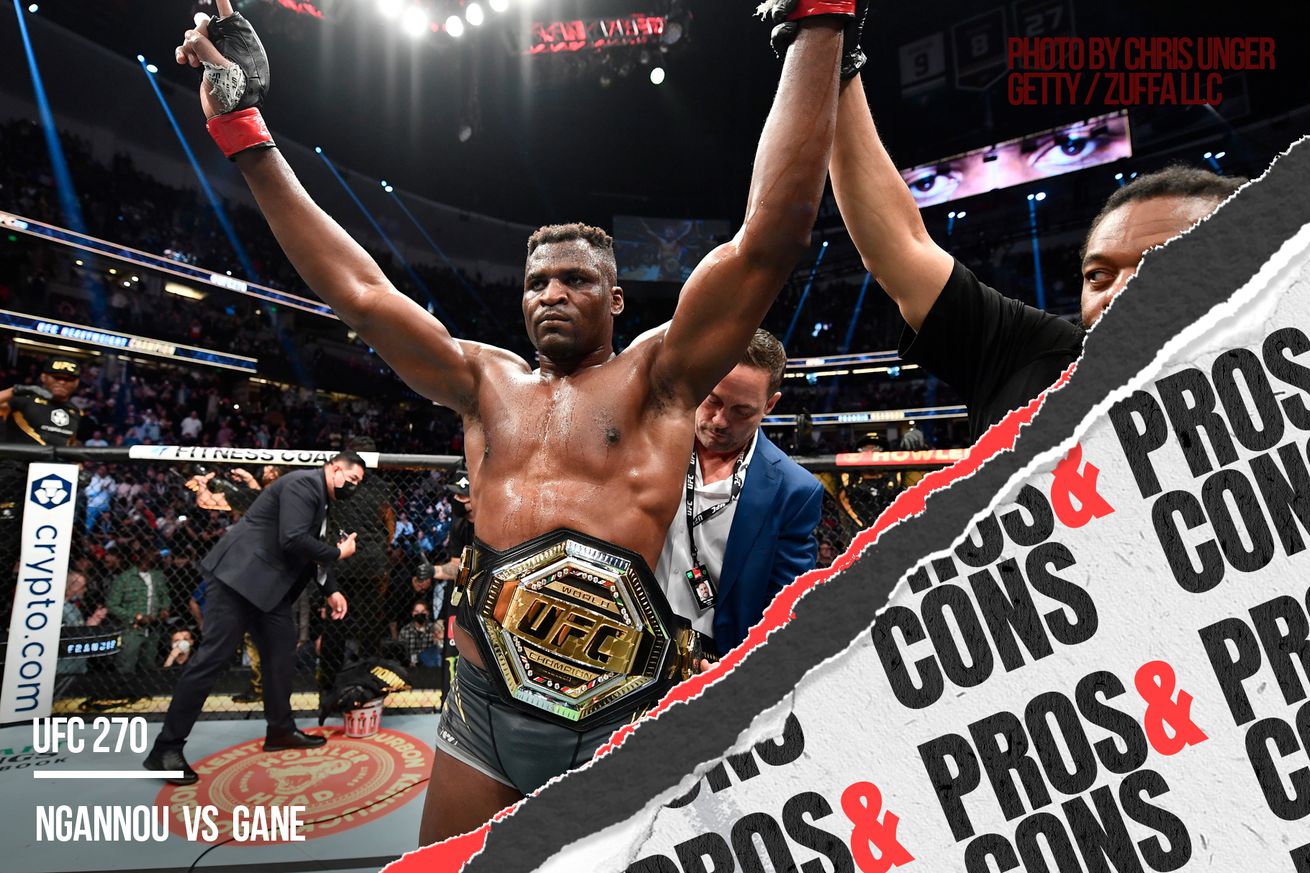 Get the Full StoryDana White put the belt on Deiveson Figueiredo, but not Francis Ngannou. Photo by Chris Unger Zuffa LLC

This is UFC 270 in a few short tweets! UFC 270 is in the books, and it saw two intriguing title bouts. In the main event, Francis Ngannou showed a new wrinkle to his game as he successfully defended his heavyweight crown.

If you told me before tonight that Ngannou would lose the first two rounds but win the final three, I wouldn t have believed you. Add how he ll do all that by out-grappling Gane to win a decision and I would ve thought you were absolutely crazy. But that s exactly what happened, and apparently he was dealing with a completely torn MCL as well.

It didn t have the same highlight reel as his previous fights, but the idea of Ngannou still constantly improving and truly rounding out his game is a pretty scary thought for other heavyweights.

In the co-main event, Deiveson Figueiredo made some quality adjustments to his overall game, and got his belt back from Brandon Moreno. He was more patient, didn t head hunt, and in turn, didn t put himself in bad situations especially on the ground. It was still very competitive and very entertaining, and honestly, I wouldn t mind seeing a fourth fight.

Below, we analyze the pros and cons of each of the key bouts, with a quick twitter thread that s short and fitting for people s social media era attention spans:

NURMAGOMEDOV CHOKES OUT STAMANNCONS: None!PROS: That was fast and clean. It s not just the different grip, the set up for that guillotine was pretty too. https: t.co CBb37SFkE1 Bloody Elbow BloodyElbow January 23, 2022

PEREIRA BUSTS UP FIALHOPROS: Pereira is unsurprisingly involved in another wild fight. He was disciplined by his standards and looked sharp, leaving Fialho with no answer to those front kicks.CONS: Nothing really, that could actually be FOTN on other cards. Bloody Elbow BloodyElbow January 23, 2022

FIGUEIREDO GETS BELT BACK FROM MORENOCONS: Nada!PROS: Such a great fight, and evenly matched rivalry. Figgy came out more composed and patient, and it paid off big. He always had power, but now he didn t overcommit and put himself in bad situations. https: t.co rmzgo9PkW7 Bloody Elbow BloodyElbow January 23, 2022

NGANNOU OUT-GRAPPLES GANEPROS: How many predicted Ngannou would win the last 3 rounds AND do it by grappling? Ngannou showed more layers to his game, apparently even with a torn MCL. Interesting to see what happens to his contract now.CONS: Pettiness? https: t.co o6DfdrNZ9y Bloody Elbow BloodyElbow January 23, 2022

#UFC270 OVERALLPROS: Figgy-Moreno was great, AGAIN. A well-rounded Ngannou is a scary idea. Will UFC pay Ngannou now? Will he be 1st to escape the champion s clause? Either way this situation could be good for fightersCONS: Ref issues. Not a strong undercard, but it delivered Bloody Elbow BloodyElbow January 23, 2022