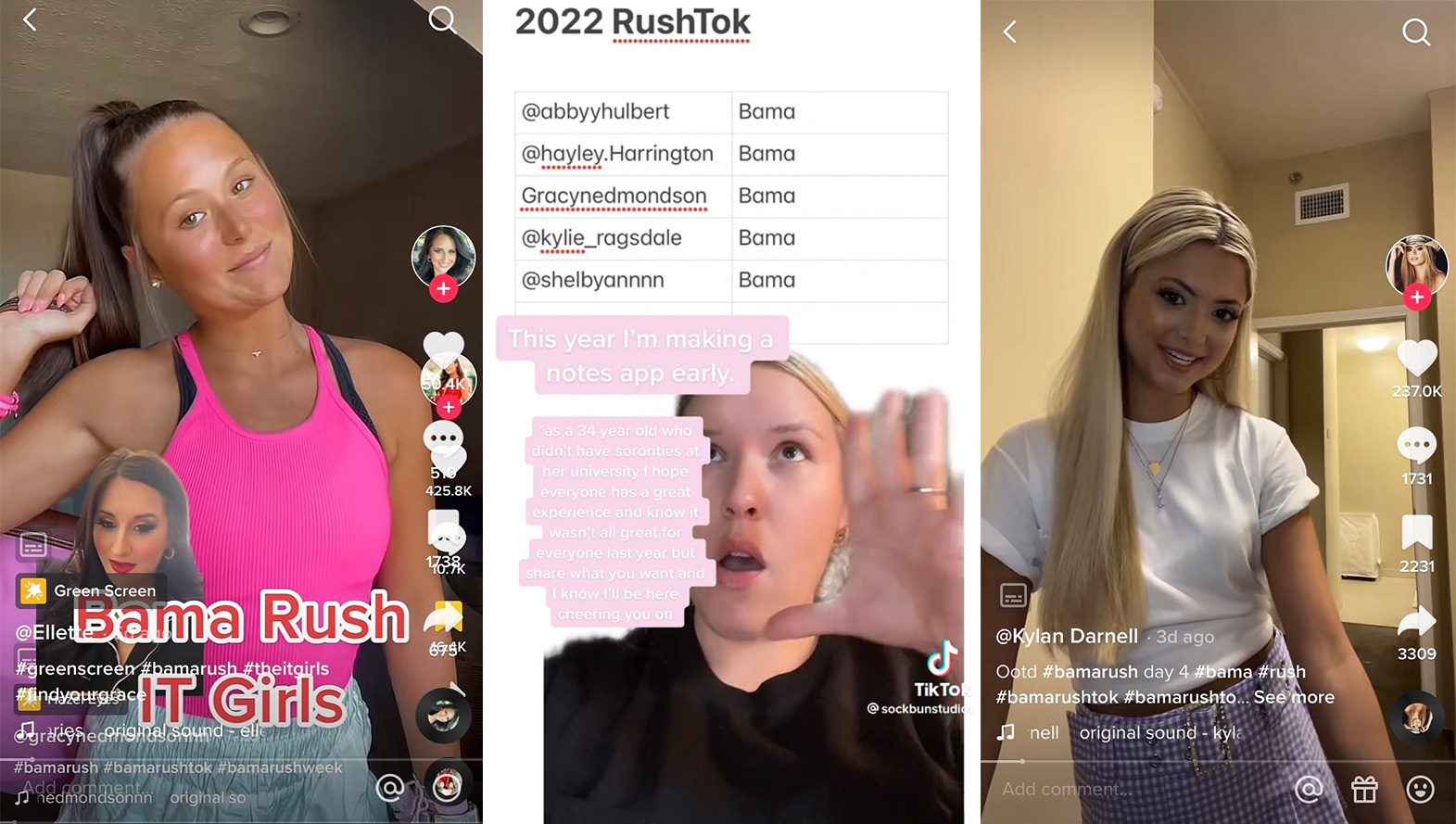 Get the Full StoryWho needs reality TV when there's #RushTok?This time last year, we were first introduced to the strange world of University of Alabama's sorority recruitment. Our collective For You Page was inundated with young women showing off their OOTDs outfit of the day and giving daily updates on their journey as they rush the college's 18 Panhellenic sororities. We became obsessed, learning the language of sororities and debating the classism, racism, and elitism of Greek life. But as quickly as #BamaRush took over our FYPs, it disappeared. What might have been dismissed as a brief phenomenon attributed to a slow pandemic summer and back-to-campus excitement, or even the novelty of an arcane ritual, has now established itself as a yearly online event with its own fanatics. In the weeks leading up to Bama Rush, which officially kicked off on Aug. 6, TikTokkers celebrated "Bama Rush Season 2" and speculated who would fill the shoes of Makayla Culpepper as this year's main character; Culpepper was one of the only women of color on #RushTok in its inaugural year, and her profile still boasts 140,000 followers. She had been dropped by every sorority, which ignited a wave of criticism against Alabama's rush process. In spite of Culpepper's virality, or perhaps because of it, a slew of 18-year-old girls vying to become sorority sisters, or PNMs potential new members , were back at it again, fueling the anticipation with what's in my bag videos on TikTok ahead of recruitment week. Bama Rush Season 2 has solidified #RushTok and its fans as an online subculture that looks eerily similar to reality TV fandom. The way TikTokkers are consuming and creating content about Bama Rush turns these normal teenage girls into overnight stars and recruitment into a spectator sport observed by millions.To get a taste of the fanaticism surrounding #RushTok look no further than the "BamaRush" tag on TikTok that has accumulated more than 1.2 billion views. Under it, you'll find TikToks like ellette.diaries's "Bama Rush IT Girls," where she breaks down the It girls of Bama Rush Season 2. Her video has received nearly 50,000 likes. Meanwhile, in the comments section of videos posted by the PNMs, fans are vocalizing their support with comments like "so proud of you" and "rooting for you from Belgium." The stan comments on these videos look like the average replies to a PopCrave tweet. "There is a similar dialogue that happens in the comment sections of people talking about reality TV characters and of Bama RushTok," explained Katlin Marisol Sweeney-Romero, a PhD candidate at Ohio State University and the author of a chapter on Bama Rush in TikTok Cultures in the United States. "Fans of reality TV expand on the storylines we get on the show by talking about their behavior or persona on their social media profiles, and a similar mythos and narrativizing has been happening in the comments section of Bama RushTok faves like Kylan Darnell." In Darnell s comments section spectators are sharing information about her that they've found online, filling in the gaps left by Darnell's own social media presence. Her nearly 260,000 followers know she's a former pageant girl from Ohio. Of course, her comments are also filled with hundreds of stan sentiments like "she is the main character."But with every pretty blond heroine, there has to be someone the internet dictates as the villain. And the drama on #RushTok has real-life consequences. Sarah Coon, a 34-year-old nanny in Ohio, became fascinated by #RushTok last year, so ahead of this summer's recruitment week she made a spreadsheet of all the girls who are participating in Bama Rush and their TikTok handles. She shared this spreadsheet in a TikTok video, saying, "As a 34-year-old who didn't have sororities at her university I hope everyone has a great experience and know it wasn't all great for everyone last year but share what you want and know I'll be cheering you on." Coon's video went viral it has over 800,000 views and 55,000 likes so far. And the backlash was just as swift.

Coon has since been dubbed "spreadsheet girl" on the app, and her document has sparked a debate among the community: Has #RushTok gone too far in its exploitation of teenage girls? Coon's video was flooded with comments accusing her of doxxing the PNMs. "You're going to get these girls blacklisted," one comment read. Another told Coon to "get a job." She even became a topic of conversation in the private Bama Rush Mom Facebook group that a diehard fan infiltrated by making up a fake daughter going through recruitment. The moms were concerned about their daughters' privacy and how being included in the spreadsheet would impact their rush experience. However, Coon says all of the girls listed in her spreadsheet are willingly sharing their rush journeys on TikTok. "I wasn t trying to create drama for the girls," she told Mashable. "I am not the only person talking about Bama Rush, and every single girl listed on the spreadsheet I found from looking through the Bama Rush hashtag." But just because the PNMs are posting about recruitment doesn't necessarily mean that they are consenting to become characters for the internet's entertainment. When posting an OOTD video, what level of engagement are these girls consenting to? One PNM asked to be removed from Coon's spreadsheet, and Coon removed her and made the video with her name private. "Then I saw someone else with hundreds of thousands of followers post about that same girl and didn't see any comments asking for it to be taken down," shared Coon. In an ecosystem where every creator is fighting for attention and pivoting their content to cover the viral moment, if you don't post about it someone else will."On the one hand, posting your rush experience is a potential asset for these individual girls to increase their social and economic capital by having brand sponsorships or being able to supplement their income with social media," said Sweeney-Romero. "At the same time, it continues to blur what it looks like for people to have time off where they are not monetizing a hobby." But it's not just the girls who are benefiting from their content flooding peoples' FYPs. Creators and brands are embracing #RushTok and using what the girls share to their own advantage. The broader culture capitalizing on teen girls and exploiting their interests for views and money isn't a new phenomenon. Despite driving cultural trends, teen girls are largely disrespected from the treatment of young Disney stars to the public skewering of VSCO girls. RushTok and its popularity among adults on the app is only the latest iteration of social media exploitation of young women.

Alabama rush TikToks are huge, but they also remind us of sororities' racist, elitist culture

That's not to disregard how much worse things are for women of color who are participating in a system that, until 2013, denied access to Black women. " RushTok is a convergence of gaming, reality television, and social media that s interactive and participatory," explained Zoetanya Sujon, the Program Director in Communications and Media at London College of Communication and member of the TikTok Cultures Research Network. "However, there are still power dynamics. It's not democratic participation. It's something that's hugely layered within cultural symbols and cultural power." Alabama rush season's visibility on TikTok only reinforces Greek life's racism and elitism, especially on an app where white creators and institutions routinely benefit from Black creators. "These predominantly white sororities, oftentimes are using audio clips from Black creators. And they get cool points for participating in Gen Z culture that really does appropriate Black culture and aesthetics, and language," explained Sweeney-Romero. As entertainment and social media become more intertwined, the parasocial relationships they produce between creator and viewer become more complicated and even toxic. The lines have further collapsed as the media has taken note of Bama Rush's popularity. It's all fun and games until the VICE cameras come to campus.