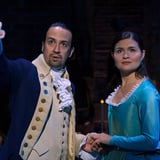 Get the Full StoryFor a musical that relies heavily on the power of words, one of the most poignant Hamilton moments comes - surprisingly - when nothing is said at all. At the end of the show now available to stream on Disney , the full cast performs the moving number "Who Lives, Who Dies, Who Tells Your Story" and Alexander Hamilton's wife Eliza played by Phillipa Soo delivers a final monologue. The beloved Schulyer sister explains how she devoted her life to Alexander's legacy: she raised funds for the Washington Monument, she established an orphanage, and she compiled Alexander's letters and writings for his biography.

Eliza delivers her emotional parting line, "I can't wait to see you again. It's only a matter of time," before Alexander takes her hand. What happens next leaves some fans puzzled, even after seeing the up-close taping. Eliza walks to the edge of the stage and appears to see something shocking and gasps audibly, with tears streaming down her face. But what did she see?

There are plenty of fan theories about what this mysterious moment could mean. In fact, it's such a point of confusion that Soo and show creator Lin-Manuel Miranda have separately addressed the speculation. We've broken down the most-popular theories as well as a few of our own for your consideration, ahead:

As Eliza mentions in her closing monologue, she lives another 50 years after Alexander dies. By the end of the show, she's walking hand-in-hand with her late husband which might imply she's crossed over to another side and sees what's beyond.

Another theory suggests Eliza's gasp is simply an expression of her relief to be with her husband after death. Although Alexander leads her around the stage, she may not fully register their reunion until the final scene.

just a reminder that the gasp eliza makes at the end of who lives, who dies, who tells your story is her seeing the audience and realizing that her husband s story was carried on #Hamilton pic.twitter.com MahMwGkpcx- sitharies July 3, 2020

This is perhaps the most popular theory: Eliza is reunited with her beloved Alexander, who shows her that the efforts to "tell his story" have paid off. She's overwhelmed with emotion when she breaks the fourth wall and sees a theater full of patrons who are interested in her family's legacy.

OK, this one is personal because I have two sisters, but hear me out. I like to think that Eliza could be just as passionate about reuniting with Angelica and Peggy Schulyer as she would be to see Alexander again. Obviously, these sisters have an incredibly close bond. See: "I love my sister more than anything in this life, I would choose her happiness over mine every time." A reunion with her oldest son, Phillip, would also be beautiful.

When Hamilton made its Broadway debut in 2015 the world was a different place, and naturally, it continues to change and evolve as years pass. On any given night, Eliza could be seeing the progress or the perils the country her husband founded is facing since her death in 1854.

Miranda and Soo are the people with the closest relationship to this Broadway character, and as such, are the most reliable sources for the true meaning behind Eliza's gasp. However, frustrating as it may be, they seem to be of the same opinion that this moment is up to anyone's interpretation.

In a conversation with AOL Build back in 2016, Soo said, "People are like, 'Is it Eliza going into heaven? Is she seeing Alexander? Is she seeing God? What is it?' And it's kind of all of those things. Sometimes, it's literally, I look out and I see the audience, and that's what it is, but I think, that idea of 'transcendence' is present in all of that," Soo said. "Whether it's in Eliza's mind, or in Phillipa's mind, they're both one and the same, which is beautiful about that moment."

Lights, Camera, Action! The Best Pop Culture-Inspired Halloween Costumes of 2020
Master Your Rowing Form - and Put It to the Test With a 20-Minute Beginner Workout
Only A True Disney Stan Will Be Able To Get 14 18 On This Age Quiz
19 Nostalgic Reminders About How Good The Australian Women's Weekly Cake Book Was
Ariana Grande Went on Vacation With Dalton Gomez, But All I Can Think About Is Her 40 Bikini