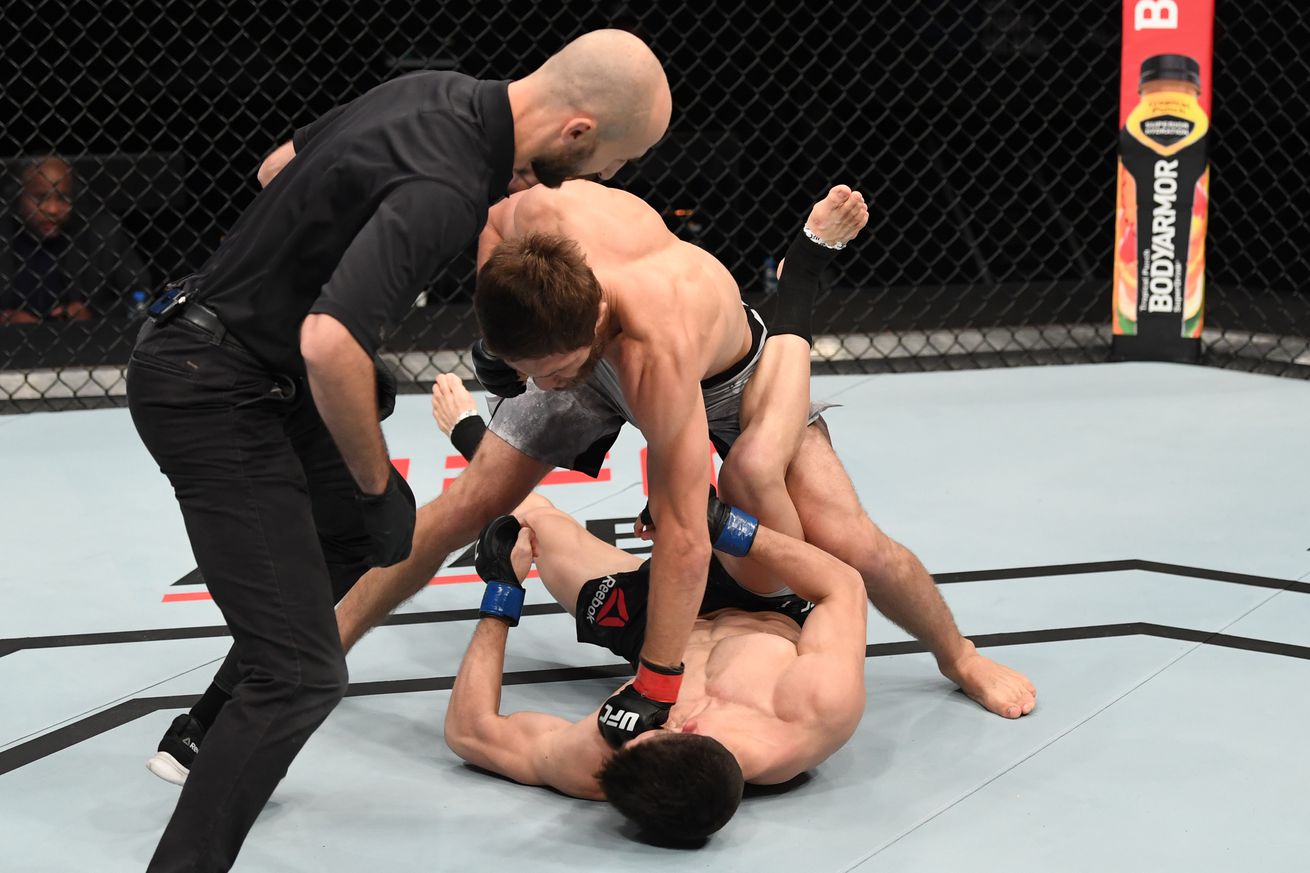 Check out the results and highlights from the UFC Fight Island 5 prelims, where Guram Kutateladze took a split decision over Mateusz Gamrot, and Said Nurmagomedov knocked out Mark Striegl in 51-seconds. The UFC Fight Island 6 preliminary card has just wrapped up with a back and forth lightweight affair between promotional newcomers Mateusz Gamrot and Guram Kutateladze. Each man had their moments with Gamrot winning a bunch of takedowns and Kutateladze getting the better of the standup, but it was Kutateladze who took the split decision. In his post-fight interview, Kutateladze stated that he thought Gamrot had won the fight and didn t know how the judges scored it for him. There s something you don t see everyday. A win is a win and Kutateladze advances his record to 12-2.

Before that, the UFC s #15 ranked women s flyweight, Gillian Robertson, dominated Poliana Botelho on the ground to walk away with a unanimous decision. She found herself in full mount several times and racked up a ton of top control throughout the match. Robertson has won now four of her last five and in her post-fight interview called out the #13 ranked Antonina Shevchenko.

Another finish on the card happened in the light heavyweight division when Maxim Grishin scored a standing TKO on Gadzhimurad Antigulov with two-seconds left in the second round. Grishin started to flurry with his boxing, causing his foe to shell up against the fence, and he didn t let up until the referee said to. Grishin doesn t have the most polished style, but he does have a very 205-pound feel to him which can make for some fun fights. Opening up the event, Said Nurmagomedov made quick work of Mark Striegl, scoring a knockout in just 51-seconds. Striegl tried to push the pace, but a check hook sat him down and Nurmagomedov finished off the fight with ground and pound. Nurmagomedov is now 3-1 under the UFC umbrella.

Gamrot shot in low on Kutateladze to get the takedown early in the opening round. Kutateladze threatened off of his back with an arm lock, and then with a leg lock. Once Gamrot went for his own sub, Kutateladze was able to stand back to his feet. The lightweights spent a lot of time measuring, with neither man wanting to make a mistake, but Gamrot seemed to be landing a bit more.

Kutateladze dropped Gamrot as soon as the second round started. Gamrot quickly jumped up to his feet and appeared to have recovered quickly. He started to throw back but he was looking a bit desperate. Kutateladze was able to fight off the first takedown attempt from Gamrot, but ended up on his back on the second try. Kutateladze didn t spend much time there, though. He threatened with an omoplata until he found his moment to escape.

Kutateladze did a fabulous job of refusing to allow Gamrot to make it a grappling fight right out of the gate. Kutateladze was scoring with his punches and kicks, while Gamrot was more focused on his boxing. Gamrot finally got his takedown, but didn t do anything with it before standing up on his own accord. Kutateladze landed a couple of clean shots on the feet, but then gave up a last-second takedown to finish the bout on his back.

Robertson dove on allow single to get things going, but Botelho fought hard to stay vertical. Botelho landed a couple of sneaky strikes on the clinch, including a knee to the face. In open space, it was Botelho who was landing the better strikes while stuffing the takedown attempts. However, with less than a minute remaining in the round, Robertson got her takedown and landed a set of knees to the body before the bell.

Robertson caught a kick early in the seocnd round and was able to take top position because of it. Botelho found herself stuck on the bottom, and ultimately gave up full mount. Robertson dropped down some ground strikes while maintaining control, not allowing Botelho to return to her feet for the rest of the round. Botelho was able to stuff Robertson s initial takedown attempt in the final round, but still ended up on her back within 60-seconds. Robertson again worked her way into full mount, and dropped all sorts of strikes. Botelho did not return to her feet once again.

After measuring one another, Park blasted a double leg takedown. He threatened with a guillotine to prevent Phillips from standing up to his feet. Park transitioned to the back and dropped a series of hammerfists as he maintained control. Phillips did not improve his position at all.

The second act started with Park hitting a quick takedown up against the cage. Phillips had very few answers for the top control of Park. A barrage of hammerfists rained down until the referee warned Phillips to move. Phillips exploded but Park stayed in control and kept dropping strikes. Again Phillips did not return to his feet. Phillips threw a flurry to open the final round, but then got taken right to the ground. It was more of the same. Park controlling and Phillips not doing much of anything.

Mullarkey got himself a takedown early int he first round, but ZIam hit a slick sweep to get on top. He was able to land a couple of strikes before Mullarkey stood back up. Mullarkey pressed forward and ate some shots as Ziam worked his counter striking. ZIam was also chopping away at the lead leg of Mullarkey.

Mullarkey pressed forward again in the second round, causing Ziam to use his footwork to maintain space. ZIam landed a slick knee to the face, but Mullarkey used the moment to close the distance. Ziam did a good job of keeping his opponent off of him at first, but Mullarkey was persistent and got his takedown. Mullarkey locked down top position and land a few hard strikes. Ziam did stand up right before the bell, but was pushed right back to the ground.

Mullarkey worked tremendously hard for a takedown to start the final round, but Ziam did an excellent job of fighting it off. Ziam went for his own takedown, but Mullarkey defended and hit a single leg of his own. Mullarkey spent some time on top, and when Ziam finally stood back up, Mullarkey took him right back down. With less than a minute left in the fight, Ziam scrambled into top position and tried to land some punches before time expired. What a grueling fight!

A bit of feeling out went on to get this one going. Antigulov eventually clinched up and pressed Grishin against the cage, landing a couple of short shots before they broke apart. In open space, Grishin blasted Antigulov with a really hard leg kick that caused a slight stumble. That was definitely the best strike of the round, as not a ton of volume was being thrown out there.

Antigulov missed by a mile with a spinning kick to open up the second act, but the chaos it caused allowed him to get a takedown. Grishin worked back up, but Antigulov took him right back down. Grishin used the momentum from that takedown to scramble up to his feet. Grishin then shot in for a takedown, and after fighting off a brief guillotine attempt, he took full mount. Bunches and bunches of short elbows scored for Grishin before Antigulov finally exploded to his feet. Grishin started to let his hands go, flurrying on Antigulov, who was just covering up against the cage. The referee jumped in and stopped the fight, although Antigulov seemed to be a bit confused.

Said Nurmagomedov def. Mark Striegl by KO at :51 of round 1: Bantamweight

This one didn t last very long. Striegl pressed forward but was met with a fade away left hook that dropped him. He then dove on a leg in search of the takedown, but Nurmagomedov was already bombing away with heavy punches to the head. Striegl dropped to his back and Nurmagomedov kept punching away, prompting the referee to step in and stop the fight.