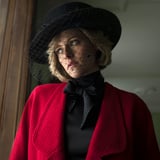 Get the Full StoryPresenting Kristen Stewart as Princess Diana! On Wednesday, Neon unveiled the very first look at Pablo Larra n's upcoming film Spencer, and it made us do a complete double take. Dressed in a red jacket and blond wig, Stewart completely embodies the famous royal in this snap. Honestly, you could have told me this was an old photo of Diana, and I might have believed you. "SPENCER is a dive inside an emotional imagining of who Diana was at a pivotal turning point in her life," the actress said in a statement.

While this is bound to be the role of a lifetime for Stewart, her initial casting in the film was met with some mixed reactions from fans. However, it seems like Stewart is working hard to prove the naysayers wrong. In an interview with InStyle in October, Stewart admitted she hasn't "been this excited about playing a part in so long." In addition to nailing down the accent, she also added that she's been pouring over biographies to get to know the late royal better. "It's one of the saddest stories to exist ever, and I don't want to just play Diana - I want to know her implicitly," she said.

The film is set to focus on one pivotal weekend in Princess Diana's life, when she spent the Christmas holiday with the royal family at the Sandringham estate in Norfolk, England, and decided to leave her husband Prince Charles. Principal photography has officially begun, and the film is slated to have a fall 2021 release.

"No, I'm Kevin!" Kevin Jonas Filmed His Daughters Making Fun of the Jonas Brothers
25 Gorgeous Engagement Rings You Can Get For Less Than 100 - Really!
Everything Parents Should Know Before Streaming Moxie With Kids
Breaking Free of Monochrome: Gabrielle Gorman Unravels the Styles That Suit Her Moods
We're Head Over Heels in Love With These 20 Romantic Movies on HBO Max